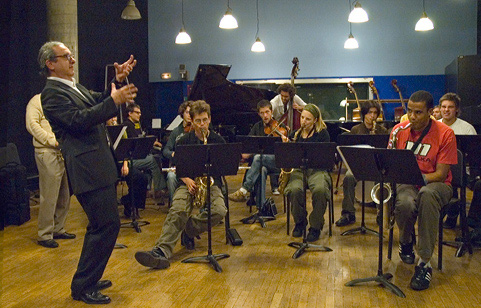 In September 2004 Riccardo Del Fra was named head of the department of Jazz and Improvised Music at The Conservatoire National Supérieur de Musique et de Danse de Paris where he had taken over from the double bass player Jean-François Jenny-Clark as teacher in 1998.

The willingness to remove divisions and to widen the field of action and interaction were at the heart of his work at the conservatoire (as in his own music), where he wished to open windows, forge links and encourage exchanges between “the many worlds of jazz and the many worlds of classic and contemporary music” as well as collaborations with other disciplines of the CNSMDP, such as dance, for example. The master classes became more open with invitations to artists from many horizons: the pianist Michael Levinas gave an analytical class on Debussy’s piano works, the organist and professor of Musical Analysis Alain Mabit presented the work of Olivier Messiaen (with an analysis of the first movement of the Quartet for the End of Time); they remained loyal to the theme of jazz and improvisation but open to different styles (with Joey Baron, Enrico Rava, Alain Jean-Marie, André Villégier, Bruno Chevillon, Archie Shepp, Barry Guy, Henri Texier, Daniel Humair, Louis Sclavis, François Jeanneau, Michel Portal, Bernard Lubat, Marc Ducret, Stefano Scodanibbio, Ran Blake, Billy Hart, Dave Liebman, Tim Berne, Vince Mendoza, Gil Goldstein Jim McNeely, Adam Nussbaum, Marc Copland, Ralph Alessi, Jeff Ballard, Bill Carrothers, Danilo Perez, Eddie Gomez, Jimmy Cobb, Ben Monder, Ethan Iverson…). Festival and broadcast directors and journalists were also invited, within the framework of the « practical aspects of the profession».

For Riccardo Del Fra «what we hand down to new generations of musicians passes obviously through technique, style, history, repertoire, but we must also learn to pay attention to the new musicians themselves and to their potential in order to help them grow. «The teacher» is a practicing musician; « the student » is a future colleague. Openness, availability and humility are essential. Knowing how to listen to others and to oneself – the importance of what is said, or left unsaid; what is written or not-written, what is suggested and/or underlying in the conception of a written or improvised musical work ».